Case: Stainless steel, satined, front bezel with speedometer scale, on the back an engraved steel base fastened with screws combined with glass, 5 ATM water resistance

Glass: Mineral glass on the front

On April 12, 1961, the launch of the spacecraft “Vostok” took place with the first cosmonaut, Yuri Gagarin, on board. “I am coming to the Earth’s shadow” his voice sounded in the ether. A new era began, in which man saw our planet from the other side. The legendary flight lasted only 108 minutes. But those 108 minutes separated “yesterday” from “today.”

In 2008, the chronograph “Gagarin” was dedicated to this historic event. It was produced with a Poljot movement, caliber 31679 and an ETA movement, caliber 7750 in a limited edition of 500 pieces. These watches were sold out in a very short time. What remained from that time are the first prototypes of the dial and hands, which did not go into mass production. Today, you, lovers of the history of space travel, as well as watch collectors, have the unique opportunity to acquire these valuable prototypes in a small edition.

The bezel with a tachometer scale, typical for pilot watches, the outlined globe with a moon phase indicator on the dial and the Russian inscription “The first man in the cosmos” remind us of the dream come true. On the back, we find an engraved steel caseback fixed with screws, bearing the engraved outlines of cosmonaut Yuri Gagarin, combined with a glass insert. For the movement, a very rare chronograph caliber 31679 by Poljot with a moon phase is used, which is no longer produced today.

With an availability of only 3 pieces at a top price-performance ratio, this prototype – chronograph is more than just a watch. The historical background, the special design and the rare movement make this model a valuable piece of contemporary history, which serves as proof of human progress. 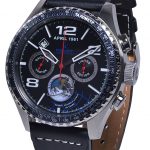