Glass: Sapphire crystal on the front

Arctis
Once to the North Pole and back.

The Arctic is the region of the Earth around the North Pole. It includes the northern polar cap, the Arctic Ocean, which is largely covered by ice, and the northern foothills of the continents of North America, Asia and Europe. The term Arctic is derived from ancient Greek and means “bear”. This is also the inspiration for the new hand-wound “Arctis” model.

But not only the polar bear, which adorns the right-hand circle of the dial as the main motif, but also the color contrasts of the individual models, play a major role in this hand-wound watch. Four different color variations reflect the theme around the North Pole. Sometimes a little quieter and more classic, sometimes striking and contrasting, like two opposite poles.

The unusual hands stand out clearly from the dial. With their long bridge and large triangular tips, they appear angular and massive, like the ice at the North Pole. At the same time, they make it easier to read the time and give the watch a sporty look. The large triangular hour markersat 6 and 12 o’clock match the design of the hands in their shape and color. The small round hour markers also tie in with the color of the hands.

The calfskin strap has been chosen to further accentuate your wrist. The soft leather perfectly hugs any circumference and the side stitching makes a distinctive statement of contrast.
The round case has a sapphire crystal at the top and contains theHand-Wound caliber 9011 PI, finished with “Geneva stripes”, including a power reserve of 38 hours, which can be viewed through a glass back. All four variants of this model series are limited to 100 pieces.

Are you now ready for an expedition to the North Pole? Our model “Arctis” will be happy to accompany you on this journey! 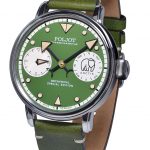